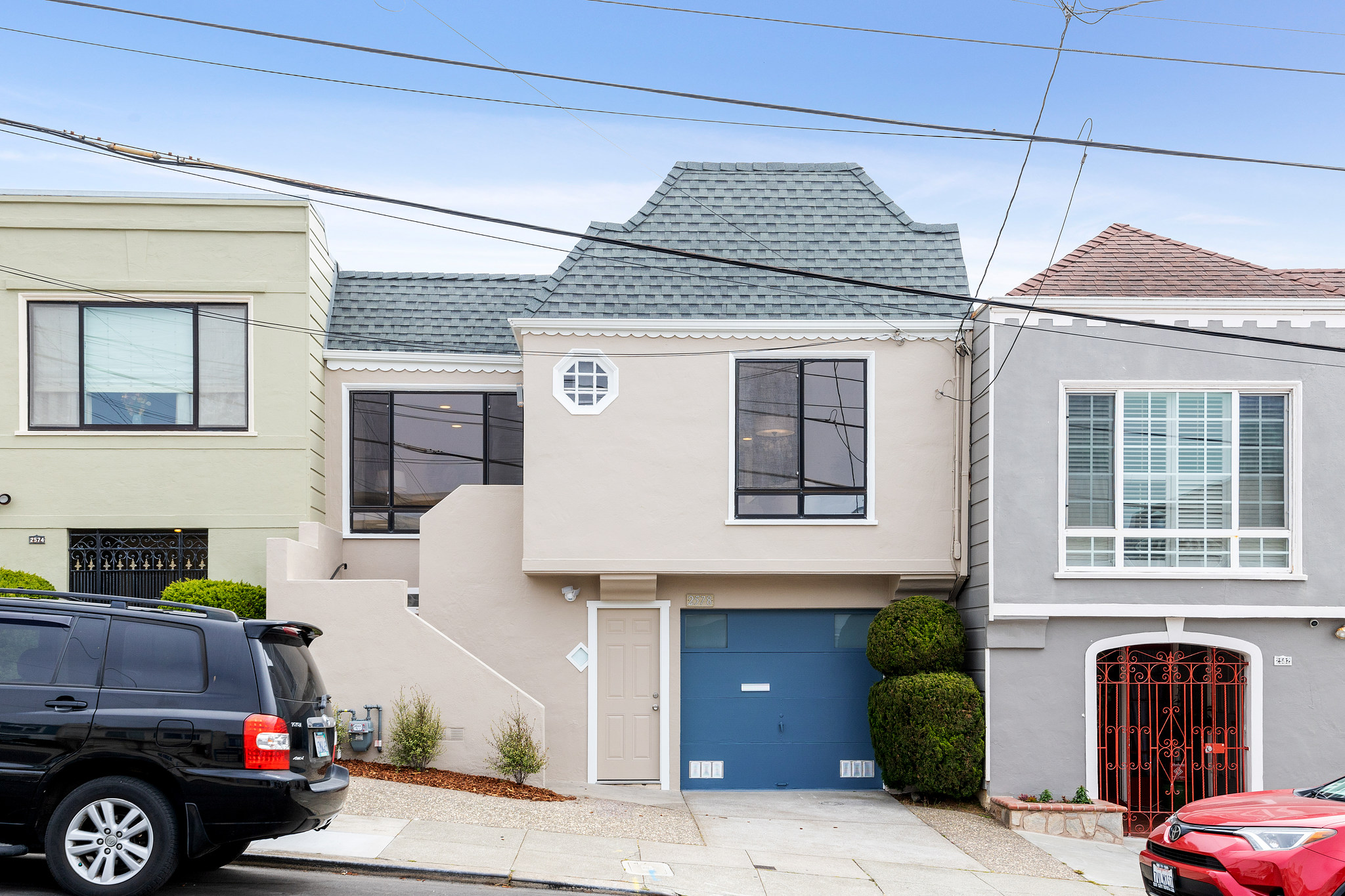 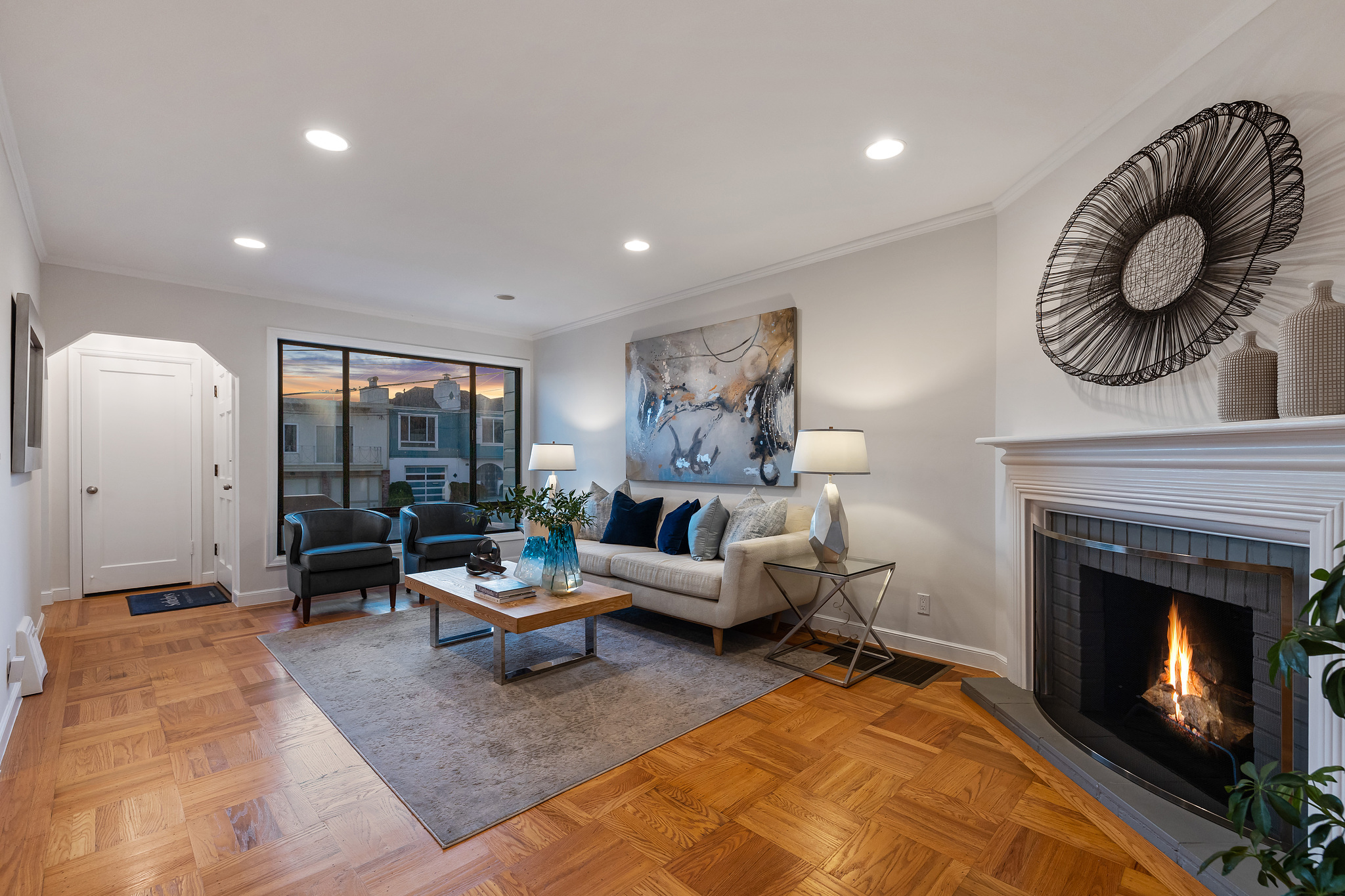 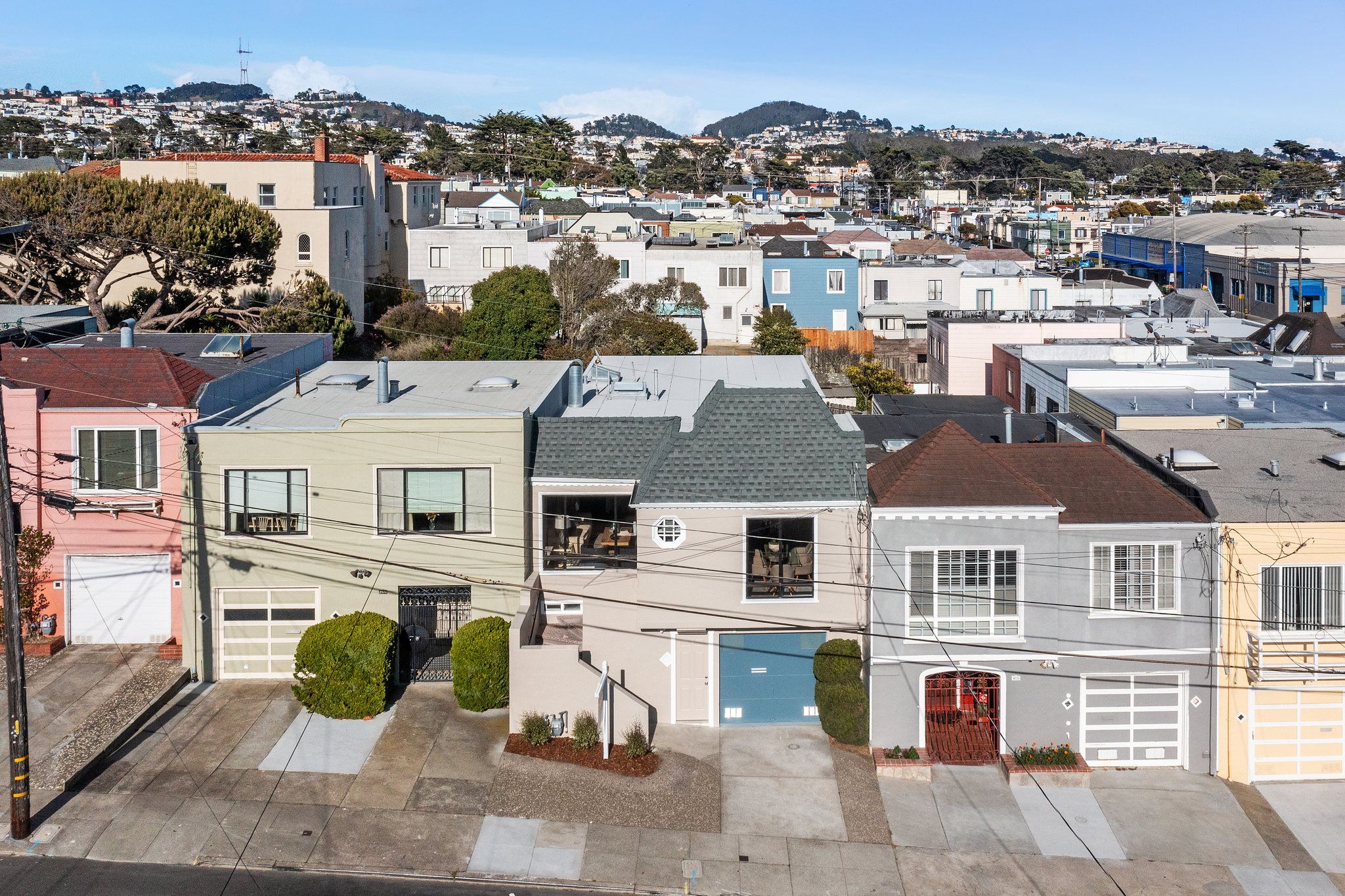 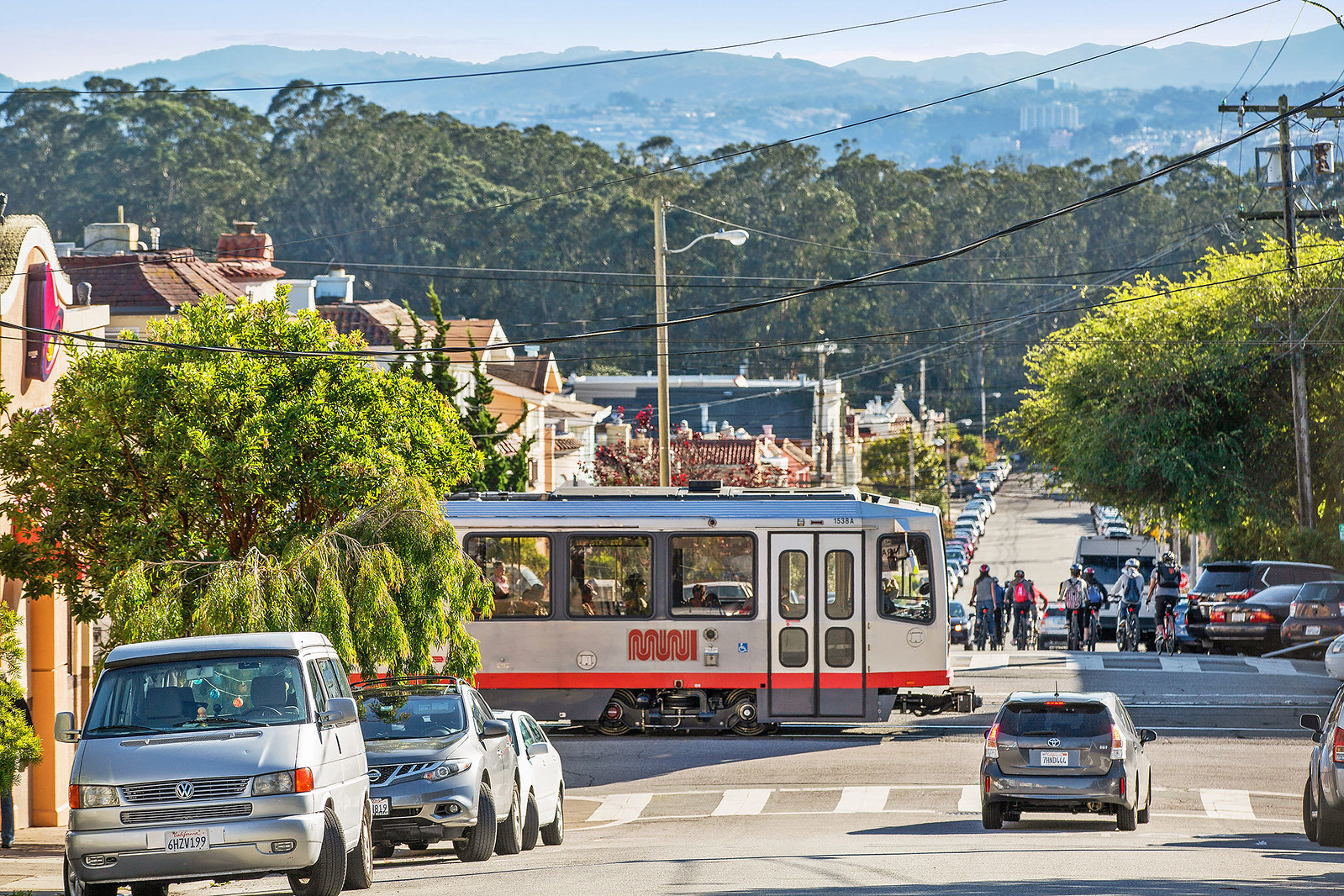 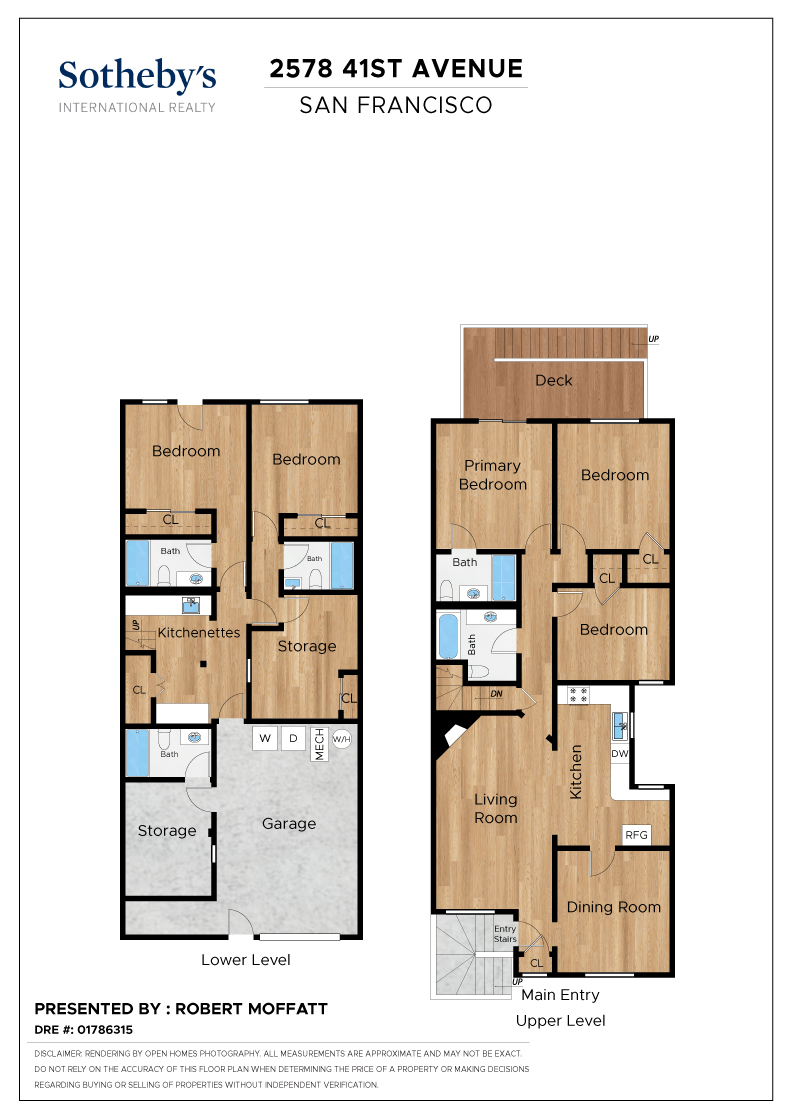 Although downtown San Francisco was well established by the 1910s; having been built up, demolished by earthquake and fire, and rebuilt again; the fringes of the city remained rural and undeveloped even into the mid-twentieth century. In the far southwestern corner of the Sunset District, the landscape was dominated by shifting sand dunes rather than the countless blocks of houses present today.

The house at 2578 41st  Avenue was built in the years following World War II; a time when the country was rebounding healthfully from wartime uncertainty and rationing, resulting in a nationwide building boom. After the war, urban and suburban neighborhood growth was encouraged by the social implications of G.I.s returning from war and wanting to settle down and start families. Babies, as well as buildings, boomed. Growth was also encouraged financially by the G.I. Bill, which instituted low-cost mortgages for returning servicemen, and made starting those families in suburban single-family homes a possibility.

In 1947, when the house at 2578 41st Avenue was constructed, the property was owned by Earl M. Berendsen and Samuel Barman. Berendsen was a building contractor and real estate broker, and Barman was a house painter. Based on their employment in the building and real estate trades, it seems likely that this team is responsible for building the house.

In June 1948, Berendsen and Barman sold the property to Llewellyn H. and Mina L. McIntire. Llewellyn served in the U.S. Navy and may very well have been one of the servicemen who reaped the benefits of the G.I. Bill to purchase this home. The McIntires only owned the property for about ten months, but did live in the house during that time. They sold it to Frank A. and Catherine H. Duffy in April 1949. A year after the Duffys bought the house, the 1950 census recorded them at the address. The household included Frank and Catherine; their seven year old son John; and Frank's father, Daniel Duffy. Frank was born in California in 1911. He worked as a manufacturer's agent for a candy broker; serving as a middleman who sold the product of a candy manufacturer to retailers. Catherine Duffy, who was called “Cappy,” was born in Minnesota in 1908. She did not work, but her obituary noted that she volunteered at Laguna Honda Hospital for over 50 years and was very involved with the Saint Gabriel Church, which was located just around the corner from the Duffys' house. Daniel Duffy was born in California in 1871 and was widowed. He had no listed occupation in 1950 and was most likely retired. An obituary notice in the San Francisco Chronicle notes that he died in August 1950, shortly after the census was taken. The Duffys lived in the house for decades and, in May 1994, transferred ownership of the property at 2578 41st Street into a trust. Frank died seven months later and Catherine continued to live in the house until her death in 2011. The house was sold the following year to the current owners.

The architectural style of the house at 2578 34th Avenue can be classified as French Provincial, a derivative of the Mediterranean Revival style. The Mediterranean-derived styles were popular from the mid-1910s to the 1950s throughout San Francisco, and particularly in the Richmond and Sunset districts. The aesthetic was based on the architecture of Spain, France, and the Mediterranean region of Europe that first came into vogue when G.I.s returning from World War I sought to emulate the domestic architecture they had witnessed in Europe. However, while European precedents were constructed of heavy traditional materials, American iterations were built using wood framing, stucco, and imitative stone and brick veneers. This allowed for an evocative appearance but cost less and was more quickly erected, resulting in entire urban neighborhoods built in the Mediterranean styles.

The stucco-clad facade of 2578 41st Avenue takes a timeless form; the quintessential San Francisco row house arrangement consisting of a basement-level garage, topped by a first story bay window, with steps leading up to an entry on one side. The garage is a single car wide, indicative of a time when personal automobiles were gaining popularity but generally still held a one-per-family status. To the left of the garage is a tradesman's entrance door, where household help might enter the property without traipsing through the formal living areas. No need for the meter reader to enter the property, though; the small diamond window to the left of the tradesman's entrance gave him a clear view of the household's utility meters. Above the garage level, the projecting bay window is square and supported by staunch shaped brackets. The bay is fenestrated with one large window and a small multi-lite octagonal window. While not French Provincial in origin, the octagonal window was common in 1940s houses. It might be considered a traditionalist interpretation of the round porthole windows found in the Streamline Moderne style that was also very popular in the 40s. Another large picture window is located on the left side of the upper facade, overlooking the entry stair that is surfaced with terrazzo, bordered by solid stuccoed cheek walls, and leads to the paneled entry door on the north wall of the main bay window. The facade is otherwise simple, but adorned with flat stucco trim, molded wood window trim, and scalloped trim at the roofline. The eaveless roof is steeply pitched and most strongly references the French aesthetic, which is characterized by distinctive two-plane mansard roofs and tall steeply-pitched truncated hip roofs.

Parkside is commonly referred to as a part of "the Sunset," but there is a definite difference in character. Located in the southwest portion of San Francisco, Parkside's often up-sloping topography makes for some fantastic views. There is a somewhat suburban feel on streets like Escolta Way, with detached homes and charming, though small, front yards. The Sunset Reservoir is something of a surprise in San Francisco's urban environment: eight square blocks in the middle of the neighborhood adjacent to Abraham Lincoln High School. The top of the reservoir is home to California's largest photovoltaic system. Inner Parkside (to the east) is a delightful gem with beautifully maintained homes and landscaping. Nearby, the West Portal neighborhood offers great boutique shopping, restaurants and coffee shops. Outer Parkside (to the west) has quaint homes built in the 1930s and 1940s, many developed by Henry Doelger. They are generally one story over garage, many of which have been configured to provide an in-law unit. The Parkside neighborhoods offer an interesting mix of families, retirees and students from SF State. The Stonestown Galleria mall is just minutes away.